Medlow Bath residents have been ambushed during COVID with TfNSW’s plans for a 4-5 lane highway widening through their village, home of the Hydro Majestic Hotel resulting in the heritage and tourism appeal of this historic village being destroyed.

The NSW Government is committed to duplicating the Great Western Highway between Lithgow and Katoomba to improve freight to the Central West and lift the current ban on 26m B double & 30m A Rigid trucks. 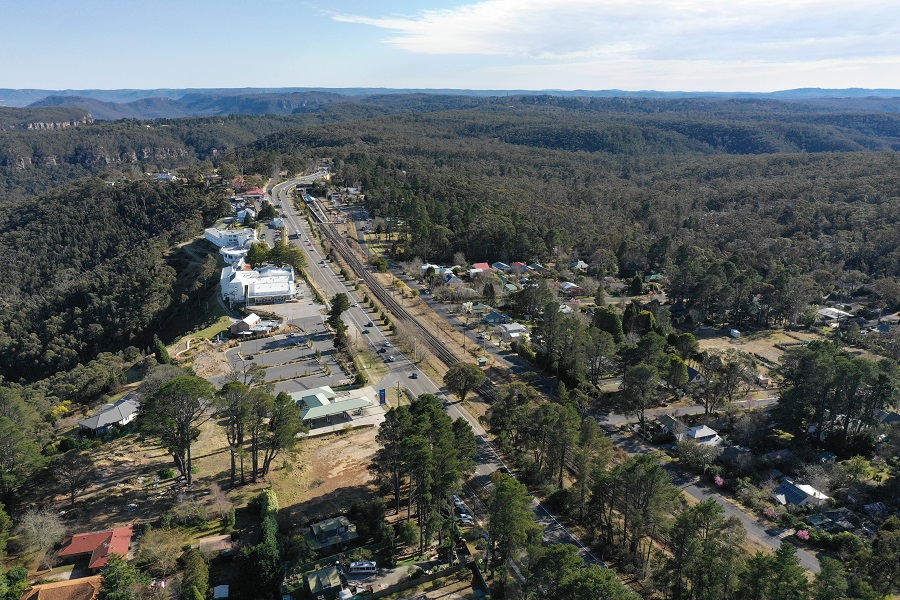 Duplicating the Great Western Highway between Lithgow and Katoomba

NSW Minister for Regional Transport & Roads, Paul Toole MP, has announced plans for an 11 kilometre four-lane tunnel bypassing the villages of Mount Victoria and Blackheath which then emerges above ground through historic Medlow Bath to Katoomba.

Failure to do an Environmental Impact Study (EIS)

On 27 July 2021 Medlow Bath residents were presented with 1000+ page REF with only 4 weeks to review and comment. After public outcry Mr Toole and Mr Barnaby Joyce announced an extension of the consultation period, by a mere 10 days, despite the hard lockdown continuing. This haste has reinforced community perception that the project is politically driven by the Nationals, whose commitments to the Central West take priority over its legal and moral obligations to engage with the Blue Mountains community and different levels of government.

The National Trust (NSW) is also concerned the scope of the REF is too narrow. “The proposed duplication through Pulpit Hill (Katoomba) and Medlow Bath will have massive impacts and the community deserves to have access to all the information and for their concerns to be properly addressed, we simply cannot afford to get this wrong,” said Mr Stowe.

Co-Owner of the Hydro Majestic Hotel George Saad feels his concerns are not heard stating;

“The Hydro is a major tourism destination in the upper Blue Mountains; everybody has some connection with this iconic and historic establishment. Like all tourism businesses we are suffering under the COVID lockdowns. Despite the lockdown TfNSW is trying to resume key parts of Hydro’s property, jeopardising our future DA approved expansion plans”.

The community is angry and upset at the lack of community respect. Medlow Bath Action Group President Stephen Caswell said: “This far-reaching proposal will turn our village into a four-lane freight corridor wedged between the Hydro Majestic Hotel and the heritage-listed train station. There are too many unanswered questions about safety, access, heritage, tourism, noise, light and air pollution, and storm water runoff into the water catchment and World Heritage-listed Blue Mountains National Park”.

The community are concerned the proposed section from Katoomba to Medlow (across Pulpit Hill) will require two bridges spanning more than 1500m over the main water catchment in the Upper Blue Mountains. This will require water treatment plant to prevent pollution of the water supply. The surface road will continue to be subject to snow, ice, fog, wind, storms and bushfires. The REF of this section has not been released.

Support for a 19km tunnel

A 19km tunnel would avoid the need for span bridges, the risk to the water catchment and the massive impact on the historic village of Medlow Bath. The whole upper Blue Mountains is concerned TfNSW won’t even consider extending the tunnel under Medlow Bath. Blackheath Area Community Alliance Secretary Michael Paag said:

“The $8 billion upgrade of the highway between Katoomba and Lithgow is far too important to Medlow Bath, the Blue Mountains and the NSW Central West to ram through in the middle of a COVID lockdown. If the NSW Government is serious about solving the transport needs of the Central West it should investigate the alternative proposal for the tunnel under Mount Victoria and Blackheath to be extended under Medlow Bath to Katoomba.  This will deliver safer more reliable access to Sydney and preserve the upper Blue Mountains amenity, environment, heritage and tourism.”

Co-Owner of the Hydro Majestic Hotel George Saad agrees, “Extending the tunnel under Medlow Bath will greatly benefit Blue Mountains tourism. The National Trust (NSW) Blue Mountains Branch supports the alternative proposal for the tunnel under Mount Victoria and Blackheath to be extended under Medlow Bath to Katoomba because this will better protect local natural and built heritage,” concluded Mr Stowe.

The Business Case Ratio (BCR) for the 19km is 2.1 where as the BCR for the 11km and dual carriageway is 1.5. The cost benefits of the 19km include: shorter time to complete, no disruption during construction, removal of spoil to Lithgow LGA, no loss of amenity, heritage preserved, conversion of the existing highway from Katoomba to Harley into a world class tourist drive, creation an alternative emergency access route, no resumption of National Park land, no truck impact. *

TFNSW plan to be ‘’shovel ready’’ to start in Medlow Bath in October 2022. The Blue Mountains City Council submission raises concerns that the proposal is prioritising the department’s regional commitment timetable over its legislative obligations under the Environmental Planning and Assessment Act 1979 (EPA) and Environmental Planning and Assessment Regulation 2000.

“This simply doesn’t pass the pub test” says Deb Brown. “The State government is in such a hurry to spend money, but they should get it right in the first place. It’s a road of national significance’’.