Queensland climber Muriel Patten becomes the first women to climb the First Sister, Katoomba, 1934. Bert Salmon is above her as both solo the climb.

With a female climbing culture firmly established in Queensland by the early 1930s, January 1934 saw 16 Queenslanders—including 7 women—travelling to Katoomba in the Blue Mountains on a ‘rock-climbing holiday’. Early one Sunday morning, with 300 people watching from a nearby lookout, Bert Salmon and 21 year old Muriel Patten climbed the first of the Three Sisters, unroped. It was the first female ascent and the Katoomba Daily was impressed:

‘Miss Muriel Patten, a petite and daring Brisbane girl, claims a record: that she is the only woman to scale the first of the Three Sisters. One section of this climb is extremely difficult and hazardous: particularly for a lady.’ When Muriel Patten returned to Brisbane, she was a celebrity, with the Courier-Mail reproducing the story of her success: ‘Miss Patten yesterday laughed at the idea of nervousness on these expeditions, although she confessed that she has had to acquire the climbing taste. She has long since lost the neophyte’s nervousness in daring expeditions to the top of Crook-neck (Glasshouse), Mt Barney, and Mt Lindesay. Now she is looking round for other crags to conquer.’ 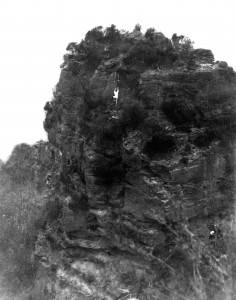