It was hats, high heels and waistcoats at the Bathurst races on Sunday when a group of Wentworth Falls friends and neighbours gathered to cheer on their horse, Oywotzy.

The little bay gelding cost just over $3000 to buy and has since racked up prizemoney of nearly $90,000, leaving his co-owners pinching themselves.

Trainer Dean Mirfin said he bought the horse at a “mixed sales” in Sydney.

“Generally it’s rubbish that goes through them so you can buy cheap horses. It’s rare that you get one that goes good,” he said.

“I saw Oywotzy and he was tiny – that’s why he was cheap. I was hoping he would just grow enough.”

His neighbours in Bermuka Avenue on the south side of Wentworth Falls, Sue Gainsford-Holland and Jeremy Shadlow, were invited to come on board.

“I’ve known Dean for about 10 years and we share a passion for horse racing,” said Ms Gainsford-Holland, whose uncle, Les Coles, won the 1967 Melbourne Cup as jockey on Even Stevens.

“We used to joke about getting a horse together and when Dean told me he had a really nice one I said, ‘OK, I’m in’.”

Mr Shadlow said he “ummed and aahed” a bit at the same invitation but eventually also bought a share of Oywotzy. 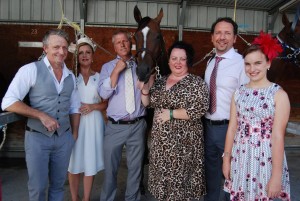