Supported by Blue Mountains City Council, Clean Up Australia Day volunteers tackled a staggering amount of rubbish in some of the Blue Mountains’ most iconic and difficult-to-reach places on Sunday 1 March.

From the vast cliffs below Echo Point, to picnic areas, ovals and carparks across the City, hundreds of local volunteers skipped their Sunday morning sleep-in, donned gloves and did their bit for the environment.

Mayor, Mark Greenhill, was amazed by the efforts people went to and what they picked up.

“People came out in force this year, with at least 18 community groups and many local schools cleaning up tonnes of rubbish from our public spaces and bushland. On behalf of Council and the community, I’d like to say a big thank you to all volunteers for joining in this year’s Clean Up Australia Day.”

In Katoomba, about 25 SES volunteers turned up to deal with rubbish dumped immediately below Echo Point, one of Australia’s most iconic and popular lookouts.

While bemused tourists looked on excitedly from above, experienced abseilers worked from ropes more than 230m above the Jamison Valley floor, removing several bags of rubbish from the cliff line below the lookout.

A second party of volunteers working at the base of the cliff prepared an enormous amount of dumped items, including wheelie bins, shopping trolleys and other refuse, ready for removal at a later date.

Clean Up Australia Day was supported by Blue Mountains City Council through the Environment Levy.

Across the country, over half a million volunteers cleaned up almost 14,000 tonnes of rubbish at 6,165 sites in streets, parks, bushland and waterways across Australia.

Held on the first Sunday in March each year, Clean Up Australia Day is now in its 25th year, and still going strong. 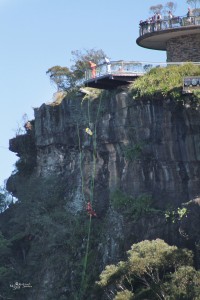