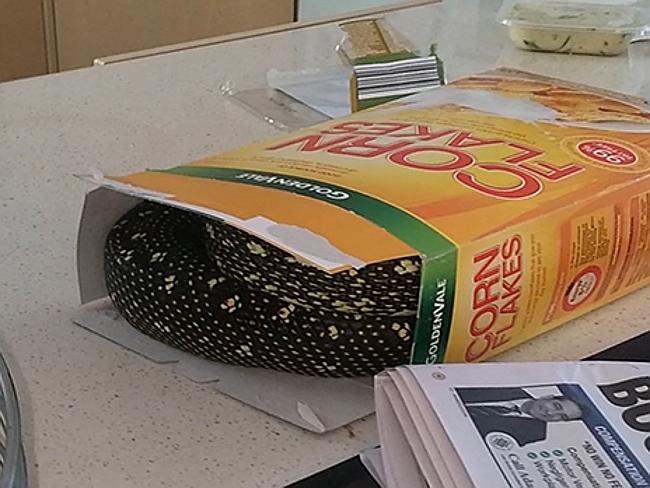 WHEN a Sydney man went into his kitchen to grab a bite, a gigantic 2m python wasn’t what he had in mind.

Jarred Smith, 22, got the fright of his life last Tuesday when he was preparing lunch and found the large diamond python coiled up in a cereal box right next to him.

Snakes are no strangers to being found in residential pools or laundry baskets, but a cereal box?

“It was super weird,” Mr Smith, who lives in Davidson on the northern beaches, said.

After alerting his father, Norris, who was also home at the time, the pair called the NSW Wildlife Information, Rescue and Education Service (WIRES).

WIRES member Chris McGreal rescued the diamond python and returned it to nearby bushland.

“The python was over 2m long and I couldn’t ­believe it was jammed into this small cereal box,” Mr McGreal said.

“When I got there I ­actually had to tear the box to get it out, that’s how tightly squeezed in it

“It’s likely it was hiding in there to feel secure.”