SNAKE catcher Geoff Delooze has seen some things – giant red-bellies, snakes in the walls of childcare centres – but never a snake with a snag. 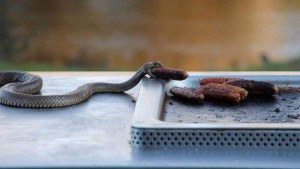 So when a mate mentioned an eastern brown snake crashing a barbecue and stealing a sausage, he didn’t quite believe him. Then he saw a photo to spoil any picnic.

‘‘This brown snake apparently came bolting out, took the sausage in front of a group of people, and disappeared back into the bush,’’ says Geoff, from Native and Feral Pest Management.

The barbecue ground was at the foot of the Blue Mountains, where campers might expect the odd brush with a snake. Says Geoff, the pic came from a mate of a mate; it’s sort of been doing the rounds.